*The information was submitted by our reader Kellyann Bamford. If you have a new more reliable information about net worth, earnings, please, fill out the form below. 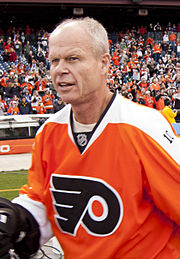 Mark Steven Howe (born May 28, 1955) is an American-Canadian former professional ice hockey defenseman who played 16 seasons in the National Hockey League (NHL) and 6 seasons in the World Hockey Association (WHA). He is the son of Colleen and Gordie Howe, brother of Marty Howe and nephew of Vic Howe. Despite the enormous shadow cast by his father and splitting time between two leagues, Mark shone as one of the best two-way defensemen of the 1980s, being a three-time runner-up for the Norris Trophy and making the Stanley Cup finals three times. He is a member of the United States Hockey Hall of Fame and part of the 2011 induction class of the Hockey Hall of Fame in Toronto. He is currently the Director of Pro Scouting for the Detroit Red Wings.